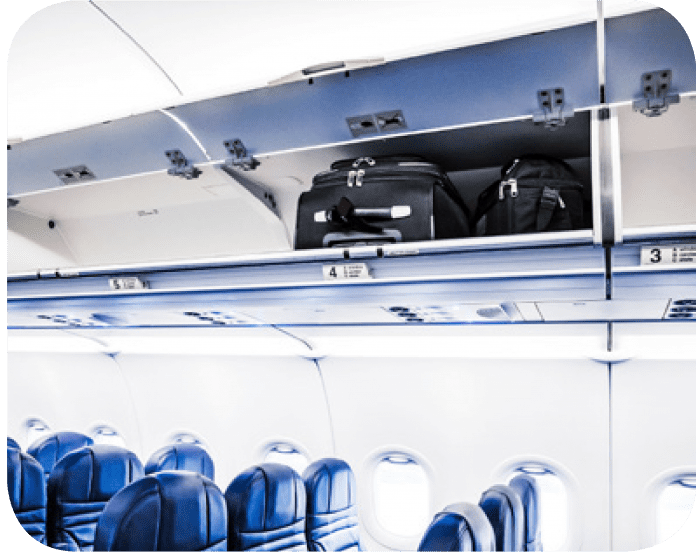 Simon was planning a trip to Israel and Robert asked him to take four thousand dollars to his sister who resided in Jerusalem. Robert placed the money in an unsealed white envelope and gave it to Simon. Simon did not count the money and stipulated that he is not assuming responsibility for the funds. He placed the cash in his wife’s bag, which he stowed in the overhead bin on the plane. Upon arrival to Jerusalem, Simon was required by law to quarantine for seven days, and thereafter he took the envelope to Robert’s sister, who counted the cash and found the amount in the envelope was short five hundred and ninety dollars. In Bet Din Robert’s sister reprimanded Simon for carelessly stowing the cash in an overhead bin. Simon responded that the four-thousand-dollar cash envelope he received consisted of many fifty, twenty, and ten-dollar bills, and it would have been an extra time-consuming burden for him to count each bill. Also, the overstuffed envelope was unreasonable to carry on his person for the duration of the flight. Simon added that it was irrational to say that someone stole five hundred and ninety dollars and left the entire balance behind. He therefore suggested that he perhaps never received the complete four thousand dollars from Robert. Robert defended that he carefully counted the money before placing it in the envelope. Robert and his sister suggested that perhaps Simon or his wife mistakenly used the cash for their expenses thinking the cash was their own. The couple responded that for the duration of the flight and the seven days of quarantine they did not even use a total sum near the amount missing.

Is Simon responsible for the missing funds? How should the Bet Din rule and why?

According to the ruling of the Shulhan Aruch, one who is entrusted with money for safekeeping is required by law to store the cash in a wall or floor safe. If travelling, one is required to keep the cash in hand or in a front pocket for safekeeping. Unless agreed upon otherwise by the owner, one who deviates from these requirements is liable in the event the cash is lost or stolen. This ruling is applicable even to an unpaid watchman since deviating from the above-mentioned instructions is viewed as an act of negligence.

Interestingly, by rule of the Shulhan Aruch, if loose cash is deposited for safekeeping, the guardian of the funds is viewed as a paid watchman. The guardian of loose cash is liable for theft or loss even if he protected the money as required by law. The underlying reasoning behind this ruling is that since the money was deposited loosely, the watchman is entitled to use the funds deposited if needed. The right to use another’s funds constitutes a clear benefit extended to the safekeeper and he is thus liable for loss or theft of the cash. By contrast, if the money is deposited in a sealed envelope, the watchman is not entitled to temporarily use the funds and is consequently not liable for loss or theft. Since such a custodian is not receiving a benefit or payment for his services he is viewed as an unpaid watchman and is exempt unless he is negligent.

According to leading halachic authorities a watchman can stipulate a clause of exemption at the time the item is first received. Hence, even an unpaid watchman can, from the onset, stipulate exemption of all liability including the loss of the item even due to his own negligence. Contemporary halachic authorities suggest that although a watchman who does not specify the level of exemption he is seeking is limited in his liability, he is not completely exempt. Hence, if a paid watchman vaguely states that he is willing to protect the item without assuming responsibility, he is exempt from claims associated with theft, but is still liable for all acts of negligence. Unless he clearly stipulates when first receiving the item that he is not assuming responsibility for his negligence, he is held accountable. If, however, an unpaid watchman vaguely stipulates he is not assuming responsibility, he is exempt in case of loss due to his negligence. Since a standard unpaid watchman is only liable for negligence, it is obvious that his unclear stipulation included his only kind of liability.

According to early halachic authorities, a messenger sent to deliver cash to another is not considered a paid watchman even if the cash he received is loose. The reason for such a distinction is that since the messenger is required to deliver the cash at the first opportunity available, his access to using the funds if needed is limited. Hence, if he is not getting paid for his services, the mere fact that the cash is temporarily loose is not grounds to make him liable for loss or theft.

By rule of the Shulhan Aruch, one who deposits an item for safekeeping assumes that both the guardian and his wife will be involved in protecting the item. Unless otherwise stipulated from the onset, a plaintiff may not accuse a defendant of wrongfully transferring the deposited item to his wife’s possession.

By Torah law, if a plaintiff states that he trusts the defendant and does not insist he take an oath to validate his claim, a Bet Din will release the defendant of the required oath. The defendant’s position is accepted as fact, and the case is adjudicated accordingly.

Our Bet Din ruled in favor of Simon and found him not liable for the missing cash. As mentioned in Torah law, although the money was in an unsealed envelope, nevertheless, Simon was instructed to deliver the cash to Robert’s sister. A delivery boy is viewed by Torah  law as an unpaid watchman. Although an unpaid watchman is responsible if negligent, since Simon stipulated that he is not assuming responsibility for the cash, his stipulation obviously included negligence. An unpaid watchman is only liable in case of negligence; hence the stipulated exemption was intended in case of his negligence. Robert and his sister expressed that they trusted Simon and his wife when they asserted that they did not mistakenly spend the missing cash. Thus, our Bet Din ruled that Simon was exempt from payment.

Moving Out of State?

Deborah is an experienced general studies teacher working in a local New York school. She and her husband planned to move out of state immediately after winter intersession. Deborah notified the school of her post-intersession plans and resigned from her position. With nearly two months’ notice, the school interviewed many teachers to fill her post for the second half of the year and narrowed down the potential candidates for the job to one teacher. Sometime thereafter, before the winter intersession, Deborah and her husband had a sudden change of plans and notified the school that she intended to stay longer at her job. The school board rejected her notification, explaining that it was too late to reverse her resignation. Deborah responded that her resignation went into effect only after intersession and prior to that date she still has the right to choose to continue her employment. The board further claimed that they finally found a qualified teacher to fill the post and they were unwilling to jeopardize the new teacher’s hiring. They added that Deborah is actively pursuing to move out of state and the school is likely to be stranded without a qualified teacher for their students. Deborah responded that she is willing to give notification two months before leaving, just as she did in the past, and that is sufficient time to find another teacher.

Is the school required to further employ Deborah after intersession? Is the school allowed to release her as planned? How should the Bet Din rule and why?