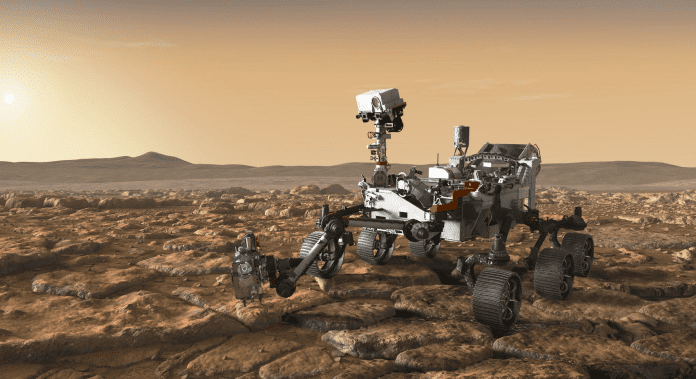 On February 18, 2021, NASA’s Perseverance rover landed on Mars and began its mission to search for signs of life.

Over the coming years, Perseverance will attempt to collect rock and soil samples in sealed tubes, to be eventually sent back to Earth sometime in the 2030s for lab analysis. They hope to answer the question: Could there actually be life on Mars?

For centuries, human beings have always asked: Do plants, animal life, or even sophisticated cultures exist on other planets? Can religious Jews believe in the possibility of alien life?

The question of whether life could exist in other planets received lots of attention during the 1950s and 1960s, when the first manned spacecraft was about to be launched. In 1960, astronomer Dr. Frank Drake took the first steps to finding an answer by searching for radio signals from alien cultures. In 1961, he published The Drake Equation – a formula to estimate the number of advanced civilizations in the universe. The calculations considered factors such as the estimated rate of stars’ development, the number of planets that might have suitable conditions for life, and the estimated period of existence of advanced civilizations. Dr. Drake postulated that in our galaxy alone, there are some 10,000 civilizations besides ours. During the years after Dr. Drake published his theory, astronomers raised this estimate significantly.

What is the Torah’s Perspective?

During the preparations for the first manned flights into space, modern-day Torah Sages were asked the question: What does the Torah tell us about the possibility of sentient life existing on other planets? Their answer was usually along these lines: We do not know of any Torah source which says there is no life on other planets, and so there really is no contradiction between the
view that such civilizations exist and Jewish belief. Still, the overall spirit of the Torah implies that there is no life elsewhere in the universe, other than that which exists here on earth.

Before man landed on the moon, astronomers argued vehemently about whether life existed there. Dr. N. Vidal, in his book, Heavenly Hosts, notes with amazement that the great Torah sage and Kabbalist, Rabbi Mordechai Sharabi, was asked about the possibility of life on the moon, and he replied by quoting a passage from the introduction to the Tikkunei Zohar, in the section entitled Patach Eliyahu:

“And You [Gd] created heaven and earth… and on earth there are trees and
grasses… and birds, fish, domestic animals, wild beasts, and human beings.”

“In view of this statement,” the rabbi wrote, “it is highly unlikely that there is life on the moon, for it states explicitly that: ‘on the earth, there are trees, grasses, birds, fish, domestic animals, wild beasts, and human beings,’ and this implies that only here on Earth were these creatures created.”

Dr. Vidal adds that according to this source, not only does life not exist on the moon; it may not exist anywhere else in the universe. Indeed, generally speaking, the claims made by scientists about the existence of life on other planets have been treated with strong reservation by the observant Jewish public – even though many outstanding scientists, such as the late Dr. Carl Sagan, have supported the opinion expressed by Dr. Drake. In fact, Dr. Sagan believed that the number of planets with advanced civilizations was far higher than Dr. Drake thought.

On the other hand, slowly but surely, as research on this subject progresses, many in the scientific world seem to be coming around to the opposite view.

William Broad, an award-winning science reporter at the New York Times, published an article on February 08, 2000, under the headline: “Maybe We are Alone in the Universe, After All,” accurately explaining the reasons for this change that has taken place among scientists. In the past, Broad writes, a growing number of astronomers took the view that alien civilizations are likely to be scattered among the stars like grains of sand, isolated from one another by the emptiness of interstellar space. But now, two prominent scientists say that this conventional wisdom is wrong. The alien search, they add, “is likely to fail.”

Astronomer Dr. Donald Brownlee and geologist Dr. Peter Ward from the University of Washington claim that based upon the latest astronomical findings, geological research and fossil record, it is the specific composition of matter on earth and its relative stability in space that permit the development of life. Contrary to previous assumptions, these conditions are extremely rare. Everywhere else in the universe, conditions do not permit life – radiation levels are too high, key elements are lacking, and planets lack orbital stability.

In their book, Rare Earth, the two authors write that many of the basic assumptions made by Dr. Drake and Dr. Sagan in suggesting that there is life on other planets have no foundation in reality. “The Drake Equation is riddled with hidden optimistic assumptions,” state the authors. They also claim that there are many astrobiologists who agree with them. According to Ward, the latest research indicates that most planets in the universe suffer from ongoing catastrophic events, such as a high rate of meteor strikes – many more than we suffer here on Earth. Dr. Ward writes that without the protection we get from the giant planet Jupiter – whose strong gravitational field attracts dangerous space debris – the number of meteor strikes on Earth would be 10,000 times higher. Thus, the chances of life existing in the center of the galaxies are exceedingly small: “If you’re in the interior of the galaxy,” Dr. Ward said, “you’re always getting bombarded.”

According to Dr. Ward, new research has revealed that very high levels of radiation comprising X-rays, gamma rays, and ionizing radiation are present in the center of galaxies, which make it impossible for life to develop.

The two authors list other very rare conditions found on Earth that are required for life.  For example, our planet is at the precise distance from the sun which allows for the existence of liquid water. If we were even slightly closer to the sun, the water on Earth would evaporate; if we were even slightly further away from the sun, it would freeze. Another factor is the existence of moons, which stabilize the planet’s rotation allowing for moderate climatic changes.

Ward and Brownlee conclude: “These are extremely rare conditions, but it seems that there are many who don’t want to recognize the fact.”

The Rebbe’s Advice to the Microbiologist

So, can there be life in other galaxies? We simply do not know the answer.

But in terms of our openness to the question, we might well ponder the response of the Lubavitcher Rebbi to Dr. Velvl Greene, a prominent microbiologist who, many years ago, was enlisted by NASA in their project to determine if there is life on Mars. Dr. Greene asked the Rebbe privately if this was something he should be doing. The Rebbe replied, “Dr. Greene, look for life on Mars! And if you don’t find it there, look somewhere else in the universe for it. Because for you to sit here and say there is no life outside of planet Earth is to put limitations on the Creator, and that is not something any of His creatures can do!”