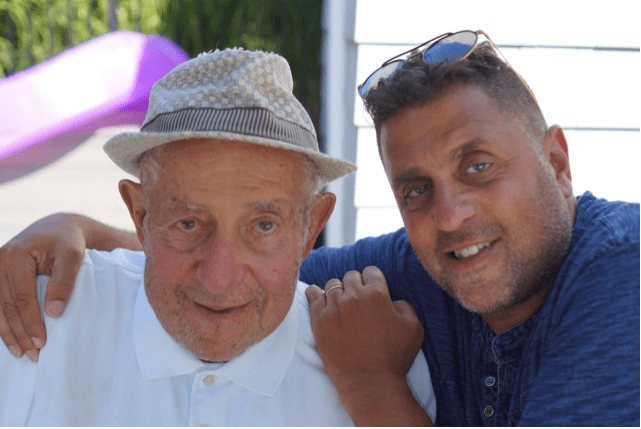 Last month we celebrated Purim, wherein a day of potential grief and annihilation was transformed into a day of celebration and laughter. This turn-around was so miraculous, that our sages mandated that we increase joy during the entire month of Adar. In the finale of Megillat Esther we read that Mordechai was “highly regarded by the Jews and popular with most of his brethren. He sought the good of his people and interceded for the welfare of all his kindred.” David “Hurdle” Tawil, a”h, was a man who embodied the spirit of Purim – full of joy and laughter. Like Mordechai, Mr. Tawil was highly regarded by our community, sought the good of his people through his hesed efforts, interceded for the benefit of peace between business partners and spouses, and was a popular public speaker and mentor.

Born in Brooklyn in 1936, David “Hurdle” was the third of six children and was a phenomenal athlete. At 6’3,” he was a natural on the basketball court, which he shared with players of all ages for many years. Married to Renee, a”h, for 55 years, the couple raised a beautiful family, with Ralph, Eddie, Eliot, Pauline Wahba, and Lena Waingort. The children were imbued with the values of work hard and don’t stop until the job is done. When the family moved to the Bedford area in 1972, Mr. Tawil worked to create the Kol Israel congregation, and was chosen to be the first President.

Six years ago, he married Joyce Tawil, who was, as one of the children related, “an angel of a woman who took such good care of our father and to whom we are so grateful.” Mr. Tawil was long ago dubbed the nickname “Hurdle” although no one seems to remember why.

Hurdle Tawil loved an audience. It provided him with the opportunity to mediate for shalom, teach a skill, such as public speaking, encourage others to do hesed, and most importantly to make people laugh. Rabbi Ralph Tawil, Mr. Tawil’s eldest son, recalls, “The two highest values my father taught us were to help others and to make them laugh. Laughter was such an important element of my father’s life. And he was very ‘machmir’ on telling a joke correctly.”

The old adage that “laughter is the best medicine” is actually a proven fact. Research shows that laughter gets rid of tension, strengthens the immune system, and like chocolate cake, helps the body release feel-good endorphins. Having a sense of humor is a sign of maturity because it demonstrates a sense of perspective about what is truly important. Mr. Tawil may have balked at all the clinical data, “too fussy” he might have said, because he knew instinctively that while a person is laughing, life seems easier. Ikey Ades, who considered Mr. Tawil his best friend, concurs. “I never saw David as a comedian. He really was a serious and intelligent person. The jokes and stories were for us. He knew how tough life could be so he took us away for a while – from all the stress and pressure and made us laugh. It was his way of giving tzedakah.”

Mr. Tawil’s son Eliot says, “Laughter was more important than money to my father.” Mr. Tawil said repeatedly that he “has never seen a U-Haul behind a hearse” to illustrate that the only thing you can take with you to the Next World are your good deeds. Eliot continues, “My father believed that success was not defined by the amount of money in your bank account, but by the amount of good deeds you can tally up. In this sense, my father was the most successful man in the world.”

Mr. Tawil’s work hard/play hard ethic made him a major player in the leagues at the Sephardic Community Center and he was the first member inducted into their Sports Hall of Fame. Mr. Tawil’s athletic prowess extended to softball where he was, according to son Eddie, renowned as a quick pitch artist who confused many a batter. He played basketball until he was 65 and softball until he was 74. When his “knees and hips gave out” he played golf. His talents extended off the court and field as Mr. Tawil also played the violin. In all these arenas Mr. Tawil did what he did best – made connections, gave advice, and made people laugh (except for all the batters who couldn’t get a hit when he was on the pitcher’s mound).

Whether on or off the court, on stage, or in gemara class, one of Mr. Tawil’s greatest talents was bringing energy and excitement to everything he did. Rabbi Avi Harari credits Mr. Tawil with teaching him “how to live a life of meaning, purpose, and impact.” Rabbi Harari describes Mr. Tawil as “wise and well intentioned. He was confident enough to offer advice while being humble enough to laugh at himself while he did so. He understood people and used creative

thinking to problem solve. At the same time, he would say, ‘If my advice doesn’t make sense to you, don’t follow it.’ He gave people space to grow.” These qualities made Mr. Tawil a much sought-after mentor and advisor.

It was easy for Mr. Tawil to educate others in living a life of meaning because that is exactly how he chose to live his life. His daughter Paulie recalls that, from a young age she received the message to always be involved in hesed. “My father always believed that hesed is what makes you who you are.” From SAFE to the Mitzvah Man, almost every organization in our community benefitted from Mr. Tawil’s involvement. He considered men like Joe Beyda, Morris Bailey, and Michael Cohen visionaries, who created organizations that continue to serve our community. Mr. Tawil involved himself with these organizations, being fully present and on the front lines, wherever and whenever he was needed.

Mr. Tawil’s son Eddie remembers him saying, “I went out and sought people who needed help and didn’t think of the next day until I found a mission of who I could help.” Mr. Tawil used another one of his great talents, public speaking, le shem shamayim. “The rabbis are teaching Torah and they need to deliver a message, so I went to all the yeshivot and kollels to teach them public speaking.” In fact, Mr. Tawil spent two weeks at the Shehebar Sephardic Center in Yerushalayim teaching the rabbis how to grab the audience’s attention and keep it by using the proper inflection, pauses, and format for delivering the speech. Following the rules of good comedic delivery, which he applied to all his public speaking engagements, Mr. Tawil encouraged the rabbis to have a strong voice, read the room, and adjust the content based on the audience’s reaction.

Rabbi Edmund Nahum learned daf yomi with Mr. Tawil at 5:30am every day for 12 years. Rabbi Nahum recalls that Mr. Tawil accompanied him to pay shiva calls and visit people in the hospital. “Hurdle was very helpful to me in my work mediating financial disputes. He understood business and technology more than I did and would explain business concepts to me.” Mr. Tawil attended the morning class religiously and while he always had a funny joke to share, he took his learning very seriously, focusing on every word of the gemara and absorbing its meaning. “Hurdle came to our classes with what he called ‘western thinking,’ a secular mindset. But over the years he acknowledged that he had a new understanding of everything as seen through the teaching of the gemara.”

His commitment to learning continued during Covid with daily daf yomi classes via zoom with his son Rabbi Ralph Tawil. Son Eliot acknowledges that, “even while my dad was in the hospital he would say, ‘get Ralphie on the phone – I want to get started on the class.’ Those classes were his sustenance, his medicine. It was so vital that he had that time with Ralphie.”

Masechet Taanit relates the story of when Rabbi Beroka Hoza’a asked Eliyahu HaNavi if anyone in the marketplace would merit a place in the World-to-Come. Eliahu HaNavi pointed out two brothers who he claimed would be going straight to the World-to-Come. When asked their occupation they replied: “We are jesters, and we cheer up the depressed. Alternatively, when we see two people who have a quarrel between them, we strive to make peace.” It is said that for these deeds one enjoys the profits of his actions in this world, and yet his reward is not diminished in the World-to-Come. Mr. David “Hurdle” Tawil lived his life by these principles – cheering us up and resolving our quarrels. Rabbi Ralph Tawil quotes Rabbi Hanina ben Dosa, “‘Anyone who people are pleased with – Hashem is pleased with him.’ When we live our lives to make people happy, resolve conflict, and do good for people, people are pleased with us and Hashem is pleased with us. In this way I know Hashem loves my father.”

While we have lost a man of indomitable spirit, resilience, dedication, and kindness, up in shamayim they must be having a laughing good time with “Hurdle” at the mike.