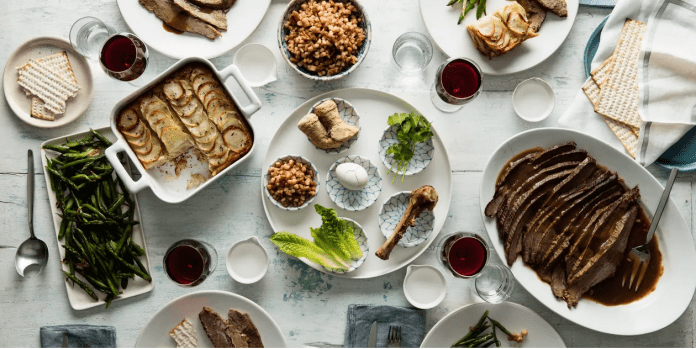 The holiday of Pesach, of course, celebrates our ancestors’ redemption from Egypt, where they were enslaved and persecuted for over two centuries. To properly understand the fundamental lesson of Yetziat Mitzrayim (the Exodus from Egypt) and its relevance to our lives today, let us take a closer look at the origins of the Egyptian exile, the time when Yaakov Avinu journeyed with his family to Egypt for what would be a 210-year stay.

The Torah (Beresheet 46:2-4) relates that along the way, Yaakov made a stop in the city of Beersheba, when he offered sacrifices and lodged for the night. Gd appeared to him in a nocturnal vision, and assured the patriarch that He would accompany him throughout his exile and ensure the nation’s ultimate return to their homeland.

Rav Meir Simcha of Dvinsk (1843-1926), in his work Meshech Hochmah, finds it noteworthy that this prophecy came to Yaakov “bemar’ot halayla” – in a nighttime vision. Why did Gd appear to Yaakov to deliver this message specifically during the night, as he slept? Rav Meir Simcha explains that Gd wanted to emphasize to Yaakov that the divine presence can rest upon the Jewish People even at “nighttime,” even in periods of darkness, when the Jews find themselves in exile, beset by troubles and crisis. We might have assumed that our relationship with Gd exists only during the “daytime,” when we enjoy the “light” of peace, health, success, prosperity, and joy. As the dark period of Egyptian exile was getting underway, Gd showed Yaakov that even during the long, dreary “night” that lay ahead, Gd would accompany him and his descendants.

Maintaining Our Link to Our Past

However, Rav Meir Simcha adds, there is one critical condition that must be met for this connection to be maintained even outside exile.

This condition is symbolically represented by an intriguing law that applies to the sacrifices offered in the Bet Hamikdash. As a general rule, all rituals performed in the Bet Hamikdash must take place during the daytime; rituals conducted at might are invalid. The single exception to this rule is haktarat emurin – placing on the altar animal sacrifices which were slaughtered during the day. As long as the slaughtering occurred during the daytime hours, the parts which are to be offered on the altar may be placed there at night.

Rav Meir Simcha explains this halachah by drawing a comparison to prophecy. The Talmud (Moed Katan 25a) teaches that generally, prophecy can be received only in the Land of Israel. However, the prophet Yehezkel received prophecy in Babylonia, because, the Gemara explains, he had already received prophecy in Eretz Yisrael. Having first established his connection to prophecy in the Holy Land, he was able to retain that connection even after being driven into exile, and so he continued receiving

prophecy in Babylonia. By the same token, Rav Meir Simcha writes, sacrificial offerings can proceed at night if the process had begun during the day. Since the sacrificing started during the day, it may continue at night on the basis of the link to the daytime sacrifice. This models prophecy, which requires the sanctity of Eretz Yisrael, but can draw from that sanctity even in the Diaspora once a link to the Holy Land has previously been created.

Rav Meir Simcha writes that this insight offers us a vitally important “musar haskel” – practical lesson for us to learn and apply. In order for us to survive through the long, dark “night” of exile, we must maintain a strong link to our past. Like Yehezkel in Babylonia, who received prophecy on the basis of his connection to the Land of Israel, we experience the Shechinah (divine presence) as long as we are linked to our spiritual roots, to our righteous patriarchs, to our ancient traditions.

When Yaakov’s brother, Esav, threatened to kill him, Yaakov was forced to flee to his uncle’s home in Haran. The Torah tells that along his journey to Haran, “va-yifga ba-makom” – “he encountered the place” (Beresheet 28:11) and slept there. This “place,” as the Gemara teaches in Masechet Hulin, was the future site of the Bet Hamikdash – that is, Mount Moriah, where Avraham had bound Yaakov’s father, Yitzhak, upon the altar. The Gemara adds that Yaakov had actually journeyed all the way to Haran, and then made a U-turn. Upon reaching Haran, Yaakov realized that he had passed the sacred site without stopping to pray. He said to himself, “Is it possible that I would pass the site where my fathers prayed, and I would not pray?!” He immediately turned around to return to Mount Moriah in Jerusalem, so he could pray at this special site.

Significantly, the Gemara tells that Yaakov felt compelled to pray at this site not because of its sanctity, but rather because his father and grandfather – Avraham and Yitzhak – had prayed there. In Yaakov’s mind, the fact that his fathers prayed at Moriah obliged him to do the same.

In light of Rav Meir Simcha’s comments, we understand why. Yaakov was now going into exile, establishing the precedent of a Jew forced to leave his homeland and to live among gentiles. As our sages teach, “ma’aseh avot siman labanim” – our patriarchs’ actions set a model for their descendants. Yaakov wanted to demonstrate the importance of tradition in enabling us to spiritually survive in exile. Our survival hinges upon our drawing from the greatness of our patriarchs, by following their example. Yaakov found it imperative before departing into exile to do what his forefathers did, in order to teach us that we survive in exile only by following our predecessors’ example and acting as they did. This is how we bring the Shechinah with us into the long, dark night of exile.

On this basis, we can also understand a famous – but puzzling – comment of the Midrash (Vayikra Rabbah 32:5), which lists several merits on account of which our ancestors were deemed worthy of redemption. These include the people’s refusal to “change their names” and “change their language.”

We can only wonder, why were these such valuable merits? There is no halachic prohibition against using non-Jewish names, and, in fact, many fervently observant Jews give their children non-Jewish names. (Rav Moshe Feinstein, in a responsum on this very subject, notes that there were a number of famous Torah sages with non-Jewish names, such as Rav Vidal of Tolosa, author of the classic Maggid Mishneh commentary to the Rambam’s Mishneh Torah.) And, certainly, there is no prohibition against using a non-Jewish language; in fact, the article you are now reading is written in English…

Why, then, were our ancestors considered worthy of miracles because of their refusal to change their names and language?

The answer might be that the Midrash here teaches us the key to survival in exile – attaching ourselves to our forebears. Maintaining our traditions and following our predecessors’ example are what allow us to draw from their sanctity and thereby be worthy of Gd’s presence and assistance amid our turbulent conditions in exile. During the Egyptians exile, before the Torah was given, the people maintained this connection by preserving their names and tongue. For us, this means preserving our customs and traditions, by ensuring not to deviate from the practices and lifestyles which has been transmitted from one generation to the next for millennia.

The Haggadah depicts four different kinds of sons, and instructs parents who to respond to each at the seder. The “wicked son” is described as rejecting and ridiculing the practices observed on Pesach, and the Haggadah says about such a child, “If he were there – he would not have been redeemed.” A person who scorns, rather than seeks to emulate, our sacred tradition cannot draw from the spiritual power of our righteous forebears, and is thus incapable of surviving exile. Our power to endure as a people stems from our righteous ancestors – and it is therefore only by maintaining our connection to them that we can survive and ultimately be worthy of redemption.

Other streams of Judaism preach that we must “update” our beliefs and lifestyle to accommodate rapidly changing societal norms. They argue that we cannot survive if we are different, if we stubbornly refuse to swim with the ideological current, if we do not follow in sync with the changes that are unfolding around us. We, however, believe that to the contrary, our source of strength during exile is precisely our preserving our “names,” our ancient traditions. Values and lifestyles are constantly changing; our anchor is our tradition, the beliefs and customs which we have received from our forebears, which have remained steady and constant for centuries.

One of the hallmarks of the Pesach celebration is the gathering of the generations around the table. Children sit together with their parents and grandparents to speak about and reflect upon our nation’s history. This aspect of Pesach is not at all coincidental. It touches upon one of the key messages of this Yom Tov – preserving our link to previous generations. The celebration of our nation’s redemption from

Egyptian exile is to teach and guide us how to achieve redemption from our current exile – and, as we have seen, the primary means of survival in the dark exile is drawing from the spiritual light of our forebears.

The society around us defines “progress” as moving away from our past, as continually rejecting our predecessors’ values and norms. For us, however, “progress” is achieved precisely through fortifying the bridges that connect us to our past, and striving to emulate our forefathers, learn from their example, and gain inspiration from their piety. The more we connect to, and draw from, our past, the brighter our present and our future will be.