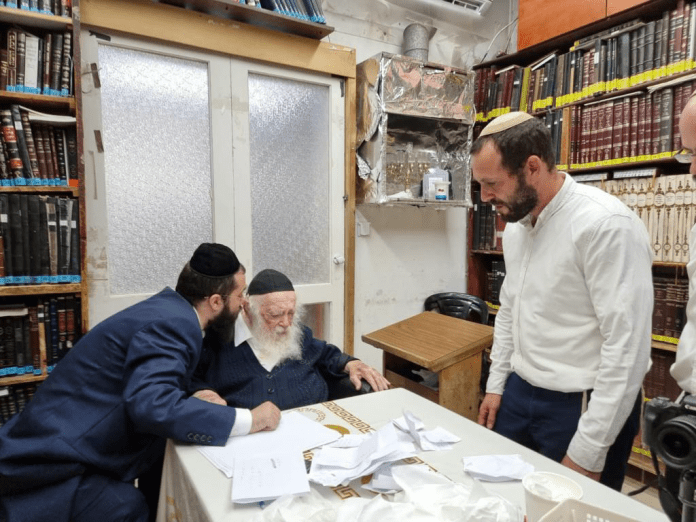 The Reform movement is demanding that the platform of the Kotel – the Western Wall in Jerusalem’s Old City – be reconstructed to create a large adjoining space to be placed under the control of the Reform leadership. This massive platform would be used for large Reform prayer services, with men and women together, in violation of centuries’ old halachic tradition. There will be nothing to stop the Reform from disturbing everyone’s tefillot by loudly amplifying and broadcasting their Shabbat services using microphones and videos. Or from bringing electronic keyboards and rock bands on Shabbat. Or from giving sermons attacking Israel or Orthodox Jews, similar to many Reform temples. Five people using an electronic amplifier could drown out ten thousand Jews seeking to peacefully pray at the Kotel.

If the plan succeeds, it will be almost impossible to remove them and restore the kedushah of our precious Kotel.

The proposed platform would disturb the peaceful tefillot of millions of Jews of all persuasions, and would embolden the Reform movement, encouraging it to promote policies that undermine halachah.

Mati Dan and Oren Honig of the Libah Yehudit organization are courageously combatting this  initiative, and they need our help.

What is the Reform Agenda?

The president of the Union of Reform Judaism, Rick Jacobs, has made it very clear that the movement’s agenda extends well beyond the Kotel. He said that “If the Reform Kotel plan is implemented, this will open the door for more religious pluralism in Israel.” His movement does not seek merely an area by the Kotel; they seek to gain validation and official recognition in Israel as a legitimate form of Judaism, equivalent to authentic Torah observance. The movement has publicly declared its desire to have their conversions, marriage, and kashrut recognized in Israel. They hope to foster widespread public Shabbat desecration with buses operating to and from the Kotel on Shabbat.

The Reform and Conservative movements in the U.S. have seized the opportunity presented by the rickety Bennett-Lapid coalition government, which includes anti-Orthodox leftists eager to topple the religious status quo of the country. PM Bennett signed coalition agreements with Reform MKs advocating to expedite the Reform agenda. This is reflected by the push to change the kashrut and conversion laws, to permit hametz in the hospitals on Pesach, and to create the Reform platform at the Kotel. However, these forces are being met head-on by passionate, determined activists in Israel who have long recognized this threat and have mobilized to confront it.

The Lone Voices to Protect Us

“The Reform want to make our Jewish country into ‘a country for all citizens’ without any Jewish identity,” says Oren Honig, director of Libah Yehudit. “If we do not fight back and involve the public, we will lose our Jewish country. For the Reform, the Kotel is the Archimedean point, the springboard to change the whole country. If their power at the Kotel is legitimized, they will demand authority over conversions, marriage, kashrut, and education.”

Reform MK Gilad Karin and the Reform movement understand that once they gain a foothold at the Kotel, they will gain control throughout Israel. Honig explains that the Reform are trying to lure the Mesorti movement (which parallels the Conservative movement here in the U.S.) and secular Israelis who do not understand the dangers of the Reform agenda. Large amounts of funding have enabled the Reform to advance their agenda in Israel’s government, the Israeli media, and in the Supreme Court.

Libah Yehudit works tirelessly to inform the Israeli public and to obstruct this effort via various methods, such as extensive lobbying in the Knesset, and careful reviewing of proposed legislation. The organization’s Rosh Hodesh Kotel initiative recruits and provides buses for over a thousand yeshiva and seminary students, and men and women from all over Israel, to come to pray at the 7am shaharit service at the Kotel every month on Rosh Hodesh, filling the Kotel plaza. This prevents the Reform movement’s “Women of the Wall” from desecrating the sanctity of the Kotel through their services, which publicly violate halachah.

Prior to Rosh Hodesh Adar Bet, Oren Honig consulted with Rav Chaim Kanievsky, zt”l, and with Rav Gershon Edelstein, shelit”a. These sages urged Oren to mobilize large numbers and fill the Kotel plaza in order to preserve the kedushah (sanctity) of the site. Through the organization’s hard work, buses brought thousands of men, women, yeshiva boys and seminary girls from throughout Israel who prayed peacefully at the Kotel. Their presence allowed no room for the “Women of the Wall” and heads of the Reform to walk into the Kotel Plaza.

“They Need to be More Involved”

As founder and Chairman of Yeshivat Ateret Cohanim in the Muslim Quarter, Mati Dan has been working since 1977 to build up the Jewish presence in the Old City. He also recognized the threats of the Reform movement, especially their attempts to undermine the sanctity of the Kotel. Mati has spent the last number of years gathering a cadre of top-notch lawyers to advocate on behalf of maintaining the status quo at the sacred site. Facing off against leftist judges is a daunting challenge, requiring huge amounts of time, energy and legal fees.

“The Reform do not come to pray; only to obtain legitimacy,” Mati explains. “Behind the Kotel campaign is their desire to start a revolution against everything that is holy in Eretz Yisrael – marriage, conversions, kashrut and education. To fight against this, we need to mobilize Jews both in Israel and in the Diaspora who care and understand the Reform’s intentions and are willing to stop it. This involves PR initiatives to educate the public about who the Reform are and what their goals are. In Israel, there is very little knowledge of who the Reform are.  American Jews understand. They need to be more involved and have a louder voice.”

Mati is fighting the battle in the courts. When the “Women of the Wall” go to the courts to sue for the right to turn the Kotel into a Reform temple, Mati retains top lawyers to fight on behalf of the sanctity of the Kotel.

“The Israeli courts are mostly liberal and have an agenda,” Mati explains. “If you do not appear in court, you lose. If you sit quietly, the judges will believe that the Reform demands do not bother people. If it really mattered to them, they would rise up and send 100 lawyers to oppose the Reform’s demands.”

With the Reform heavily pressuring the current coalition government, and in light of coalition agreements with the Reform MKs to expedite the Reform agenda, the war is boiling over. Mati explains that the fight is heading to the Israeli Supreme Court, even though it is supposed to be out of their jurisdiction. He warns that we cannot abandon the fight, because if we do not fight in the courts, the Reform will succeed in defiling the kedushah of the Kotel and of Eretz Yisrael generally.

A Call for Help

Chayim Rabinovitz, director of SaveOurKotel.Org, who is helping to organize this campaign, is calling upon Orthodox Jewry throughout the world to support the efforts of Mati Dan and the Libah Yehudit Organization to fight against the Reform Agenda.

SaveOurKotel.Org, Libah Yehudit, and Mati Dan’s initiatives are endorsed by the leading Torah sages of our generation. Both Chief Rabbis – Hacham Yitzchak Yosef, shelit”a, and Rabbi David Lau, shelit”a – have written letters endorsing the cause and urging all to contribute.

Funds are needed urgently for this campaign, and the activists are turning to us for our assistance and support.

For more information and to donate, please visit: SaveOurKotel.Org

Donations can also be mailed to: