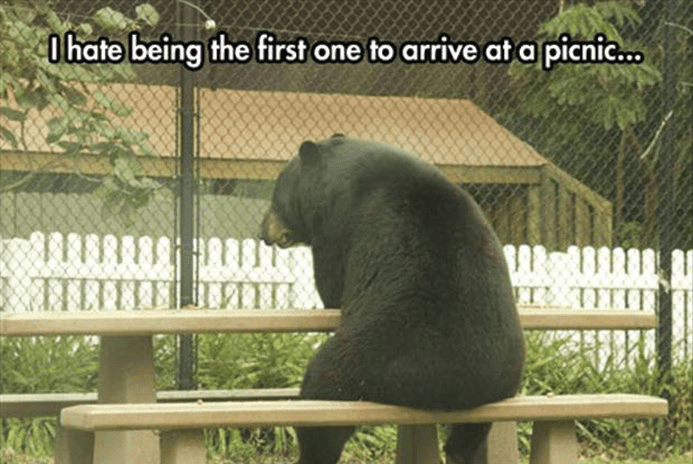 Ralph: How are the interviews going for the new insurance salesman?

Eddie: We had one very interesting applicant. Where the form requested “prior experience,” he wrote “lifeguard,” that was it, nothing else. I told him, “We’re looking for someone who can not only sell insurance, but who can sell himself – how does working as a lifeguard pertain to salesmanship?”

Ralph: So, you’re still looking to fill the position, right?

Eddie: No, we hired him.

Ralph: The lifeguard!? Why, what impressed you about his experience?

Eddie: He didn’t know how to swim.

A woman needed encouragement to keep pedaling the exercise bike in his gym. So my friend, the gym manager, said, “Close your eyes and imagine you’re riding along Broadway in New York City – it will be more interesting.”

Inspired, the woman cycled on, but after a minute she stopped.

She replied, “The traffic light is red.”

Stanley: “I don’t like to brag, but I am putting two kids through college.”

Bob: “Really? I didn’t even know you had one kid, let alone two!”

Stanley: “I don’t…they both belong to my auto mechanic.”

Teacher: “Alfred, if your father had ten dollars and you asked for four dollars how much money does your dad have left?”

Teacher: “No Alfred, I’m afraid that’s not correct. The correct answer is six. It looks like you don’t know your math very well.”

Alfred: “No it’s not, the answer is ten – it looks like you don’t know my father very well!”

Three men each made a bet that they would be the only one with enough strength to swim 1,000 yards from one island to another. The first swimmer tried and swam 300 yards before he got tired and decided to swim back. The second man then began, and after swimming out 400 yards, he got tired and swam back. The last swimmer was confident that he would be able to complete the distance. He swam 300 yards, 500 yards, 700 yards, 900 yards, 950 yards – but then he gets tired, so he swims back.

My friend wanted a boat more than anything. His wife was very adamantly against it. He bought it anyway. “I’ll tell you what,” he told her. “In the spirit of compromise, why don’t you name the boat?” Being a good sport, she accepted. When the husband went to the dock for his maiden voyage, the name that he saw she painted on the side was…”For Sale.”

The Language of Chemistry

Teacher: Billy, what is the chemical formula for water?

Teacher: What are you talking about?

I went to a store to buy insecticide. “Is this good for beetles?” I asked the clerk.

I noticed that we’re really living in an automated society – especially in New York City. It seems that anywhere in the city, whenever a traffic signal light turns green, it automatically activates the horn of the car behind you.

Barry was at his favorite eatery when he called over the waiter. “Yes?” asked the busy waiter. “Are you sure you’re the waiter I ordered from?” asked Barry. “Yes, why do you ask?” replied the waiter. “Because,” he quipped, “I was expecting a much older man by now.”

A woman walked into a store and requested a chicken. The butcher, who only had one bird left, didn’t want the woman to think that she was getting leftover stock; so, he reached into his ice box and pulled out the lone chicken without letting on that it was the last one.

“That one is too skinny, do you have one a little larger?” she asked.

“Of course,” said the butcher. He took the chicken behind the counter, away from view and made a lot of noise rolling it around the ice as if he were searching for just the right chicken. He then pulled out the same chicken and showed it to her.

“Better,” she said. “Do you have one that’s a little prettier?”

The butcher took the chicken, rolled it in the ice again and offered it up a third time.

“Great,” the woman said. Relieved and proud of his clever ploy, the butcher was about to wrap the bird up for the lady when she said… “I’ll take all three.”

After finally being called in to see the doctor, Joe was led into a room and told to remove his shoes. The nurse asked him to step on the scale and said, “I need to get your weight today.”

Without hesitation, Joe replied, “One hour and 45 minutes!”

At a recent lunch by the local sandwich shop, I watched the woman behind the counter spreading mayonnaise on my bread, and noticed part of her stained work shirt was dragging across it. “Excuse me,” I called, “your sleeve is in the mayo.”

As the passengers on the budget airline prepared for departure, two blind men with dark glasses and wearing pilot uniforms board the plane. As they make their way through the aisle, one is using a guide dog, and the other using a walking stick, nervous laughter spreads through the cabin. When the men enter the cockpit and the engines start up, the passengers begin glancing nervously around, searching for some sign that this is just a practical joke.

Moments later, the plane begins speeding faster and faster down the runway. Soon, the people sitting in the window seats realize that they’re headed straight for freeway at the edge of the airport. As it begins to look as though the plane will plough into traffic, panicked screams fill the cabin. At that moment, the plane lifts smoothly into the air.

The passengers relax and laugh a little sheepishly and soon all retreat into their magazines, secure in the knowledge that the plane is in good hands.

In the cockpit, one of the blind pilots turns to the other and says, “Ya know, Bob, one of these days, they’re gonna scream too late…”