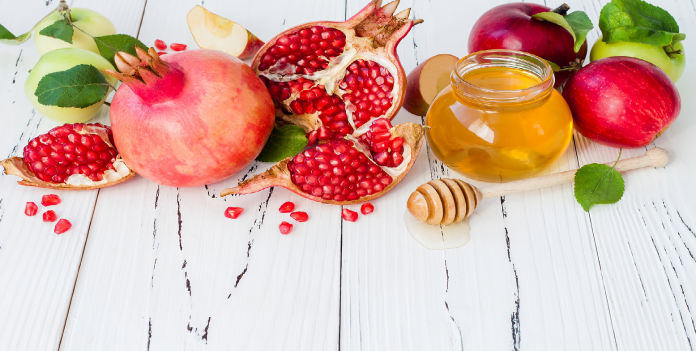 As we labor through the sobering month of Elul preparing our souls for the High Holidays that will soon be upon us, shaatras are hard at work preparing meals to ensure that Rosh Hashanah will be as beautiful and uplifting physically as it will be spiritually.

Personally, I enjoy revolving my entire Rosh Hashanah menu around the simanim (literally, “signs”), the traditional foods eaten on Rosh Hashanah as symbols of our hopes for a happy and prosperous year. This technique has expanded my cooking repertoire to include some delicious, infrequently-used produce, and has created a festive tradition that my family looks forward to each year. In honor of these unique and meaningful foods that infuse our Rosh Hashanah meals with hopeful prayers for the coming year, let us explore some interesting, little-known facts about some of the simanim, as well as recipe ideas for incorporating them into a holiday meal.

Packed with a gooey, sweet decadence, dates seem more like an indulgent treat than a health food. Yet, these delicious fruits, famed for being one of the shivat haminim (seven special species of Eretz Yisrael), have been given the well-earned nickname “nature’s candy,” as they are jam-packed with nutritional value. Grown on date palms indigenous to the Middle East, dates are chock full of essential vitamins, minerals, and nutrients such as fiber, vitamin B6, iron, vitamin K, potassium, and manganese. Dates also boast a long list of health benefits that include boosting bone health and strength, preventing abdominal cancer, decreasing allergic reactions, reducing the risk of stroke, promoting healthy digestion and excretion, increasing energy levels, and strengthening the nervous system. With about 66 calories per date, they are also a great choice for people looking to gain weight in a healthy way. If you want to enjoy dates throughout your Rosh Hashanah meal, consider adding chopped dates to a fresh lettuce salad to add an extra dimension of taste. There are also a myriad of cakes, cookies, and dessert bar recipes that feature dates as the star ingredient.

Black eyed peas were first cultivated in West Africa, and later spread to America in the 17th century. In the Southern United States, black eyed peas are a celebrated staple in traditional soul food cooking. Interestingly, a community of Sephardic Jews who settled in Georgia in the 1730s ate black eyed peas every year at their Rosh Hashanah meal. The surrounding gentiles noticed this custom and jumped on the black eyed pea bandwagon.  Dating back to the mid-19th century and continuing till today, there is a tradition in the Southern United States to eat black eyed peas for good luck on New Year’s Day. More accurately classified as a bean than a pea, black eyed peas were further popularized when George Washington Carver promoted planting them to add nitrogen to soil, and Carver touted their nutritional value. Consider serving this low-calorie, potassium-rich protein as a side dish cooked with sautéed onions, garlic, and seasonings, or in a unique salad mixed with other beans, greens, and fresh veggies and dressed with a light vinaigrette.

Leeks are part of the Allium family of vegetables that also includes onion and garlic. With a milder taste than onions, leeks are great for adding flavor to soup stock. Leeks can also be enjoyed raw in salads, boiled to create a softer flavor, and fried, which yields a crunchy, stronger-tasting leek. It is advisable to eat ½ cup serving of Allium vegetables daily to reap their significant health benefits. Their high content of antioxidants and nutrients offer cardiovascular support and reduce inflammation. Jews are not the only group that ascribes significance to leeks. In fact, they are one of the national symbols of Wales. Legend has it that Welch soldiers identified themselves by wearing leeks on their helmets in a battle against the Saxons. When they successfully defeated the enemy, the leek rose to prominence as a national emblem of victory. Try a delicious creamy leek potato soup seasoned with thyme to enhance your meal.

The beautiful, bright red color of beets makes them just as visually enjoyable as they are tasty and healthy. While we think of them today as a root vegetable, during the 19th century it was discovered that beets were a concentrated form of sugar, and a special factory in Poland was built to produce beet sugar. Later, when the British restricted access to cane sugar, Napoleon declared that beets were the new primary sugar source, launching their popularity worldwide. In the Middle Ages, beets were used for medicinal purposes, and throughout history beets have been used for red dye. Adding nutrient and fiber-rich beets to your diet can yield many health benefits, such as lowering blood pressure, increasing energy, fighting inflammation, preventing cancer, and detoxifying the body. Beets are a great addition to your Yom Tov meal. Try them marinated with lemon juice and herbs and served as a cold salad, or roasted with other root veggies. Add a dash of olive oil to create a colorful, delicious accompaniment to the main course.

The term “gourd” can refer to a variety of different crops such as pumpkins, cucumbers, squash, and melons, though squash and pumpkins are the traditional Sephardic choice for simanim. DNA records suggest that gourds were one of the first domesticated plants. Many species of gourds have hard outer shells, known as bottle gourds. Several varieties have been found at archaeological sites in Africa, Asia, Europe, Peru, and America. The plant originated in Africa and Asia, and until recently, science could not sufficiently explain the evidence of the bottle gourd in America. Scientists dated bottle gourds back to early history, but wondered how a plant species indigenous to one hemisphere could make its way across the ocean to another hemisphere. Until recently, the prevailing hypothesis purported that humans carried the plant with them when migrating from Asia, crossing the Bering Strait into the New World. Yet this theory was full of holes. Specifically, how could a tropical plant survive while traveling across the Arctic? Also, there was a lack of evidence of bottle gourds existing in Siberia, Alaska, and the Pacific Northwest. A fascinating study was conducted in 2005 based on newer models of how objects drift in Atlantic currents, solving the mystery with the conclusion that these bottle gourds actually floated to America on their own. Enjoy gourds at your Rosh Hashanah meal with the traditional Sephardic  sweet potato and squash casserole baked with dried cranberries, oil, cinnamon and brown sugar.

A well-known symbol of both Torah and the Land of Israel, pomegranates are native to Persia and thrive in the dry climates of the Middle East, along the Mediterranean, and in Southern Asia. While pomegranates have always been an integral part of Jewish culture as one of the shivat haminim and a Rosh Hashanah ritual food, other civilizations have utilized pomegranates in ceremonies. Most notably, in traditional Turkish weddings a bride would throw a pomegranate on the ground and the number of seeds which fell out was believed to indicate how many children she would have. In the past few decades, pomegranates have come into vogue as a super food, as new studies revealed the tremendous health benefits of this jeweled fruit. Punicalagin, a compound found only in pomegranates, benefits the heart and blood vessels, and contributes to the extreme potency of the antioxidants in the fruit. These powerful little seeds have been shown to fight cancer, lower cholesterol and blood pressure, and prevent heart issues. Get creative with nutrient-dense pomegranate seeds and sprinkle them on top of any dish. They can be used to garnish salads, soups, and desserts.

There are over 7,500 varieties of apples cultivated worldwide, presenting a wide array of color and taste combinations. Two common apple cultivars originated in Israel: the Anna, a yellow-colored apple with a red blush, and the Ein Shemer, a tarter apple that is a cross between a Golden Delicious and a Zabidani. Today, with apples as ubiquitous as they are, many consider them unexciting. But the basic apple has a major surprise up its sleeve. Cut an apple in half horizontally, perpendicular to the stem. The apple’s cross section will reveal five seeds within a five-pointed star, surrounded by a circle of 10 dots, known as a 10-pointed exocarp. Now, here’s where it gets kabbalistic. The stem of the apple can represent the letter vav, whose numerical value is six. Add these numbers (5+5+10+6) to get the number 26, which is the numerical value of the divine Name of Havayah. Therefore, in the most widely cultivated and consumed fruit in the world, we find the signature of the Creator of the universe! Besides dipping them in honey, try apples baked with cinnamon for a delicious side dish or in a yummy cake for dessert.

May the coming year be filled with sweetness and goodness for the entire Jewish people!