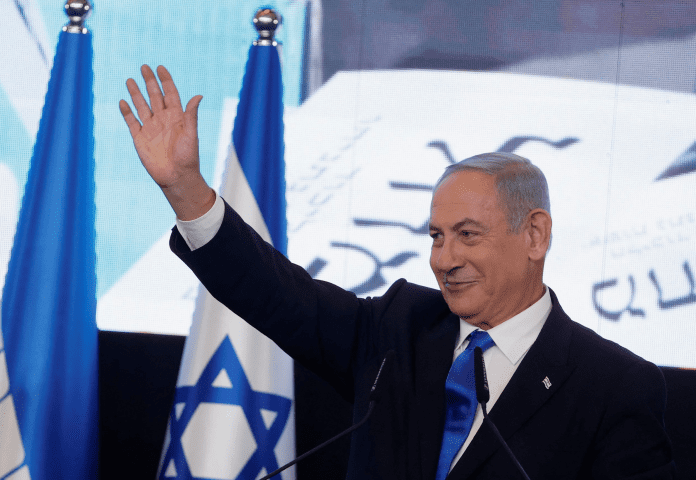 In 2019, Benjamin (“Bibi”) Netanyahu replaced the legendary founder of the Jewish State, David Ben Gurion, as Israel’s longest-serving head of state, having held the position of Prime Minister from 1996-1999, and then from 2009-2019. When he was finally unseated last spring, many of his political rivals and adversaries triumphantly declared that the “Bibi era” had ended.  But after yet another election became necessary following the fall of the short-lived Bennet-Lapid coalition, Netanyahu has returned as Israel’s premier.

Israelis have gone to the polls five times in under four years due to a series of deadlocks, and flimsy coalition governments that did not survive.  Finally, this time around, a clear majority was won.  Netanyahu’s Likud party increased its parliamentary hold from 30 to 32 seats, while its presumed coalition partners – the Religious Zionist Party, Shas, and United Torah Judaism – won a total of 32 Knesset seats, assuring Netanyahu a majority of 64 out of 120 seats. November’s election brought 70 percent of Israelis to the polls – one of the highest turnouts in recent years – and they handed Netanyahu and his coalition partners a majority which eluded all candidates in the previous four elections, setting the stage for what will likely be a stable government that will rule for the next four years.

This is not the first time Bibi returned to the throne after having been unseated. Ehud Barak defeated Netanyahu after his first term in office, in 1999, but his government fell shortly thereafter, making him at the time the shortest-serving prime minister in Israeli history. This dubious distinction is now held by Naftali Bennett and Yair Lapid, whose rotation-based government lasted just one year. Netanyahu has proven yet again that his contenders who succeed in overthrowing him end up failing to deliver and not lasting very long.

What’s the secret? Why do Israelis keep Bibi in power?

Netanyahu’s popularity is likely due, in large measure, to his track record, to the relative security and prosperity that Israel has enjoyed under his leadership. Seventy-two-year-old Dror Kolton says, “Netanyahu is the only adult in the room among all the party leaders. He is a pragmatic right-winger, rather than an extremist, who gave us four peace agreements without compromising with the Palestinians, who have never had a formal state in their history. He also elevated Israel’s economy from a third-world socialist country to the hi-tech nation that it is today, which is helping its Middle-Eastern neighbors and the entire world to progress into the future – through innovative water purification methods and other technological innovations that the entire world uses each and every day. He also opened up Israel’s gates to India, Africa, Eastern Europe, South America, and beyond. We can and will continue to talk about his achievements for a long time.”

With security threats always looming, Israelis trust Netanyahu’s knowledge, experience, and diplomatic acumen. Along Israel’s northern border, Iran threatens the Jewish State through its local proxy, Hezbollah, which exerts control in Lebanon. After outgoing PM Yair Lapid’s recent maritime agreement with Lebanon, Israel is now required to share with its hostile neighbor its valuable offshore gas field, which could conceivably fall into the hands of Hezbollah. It is estimated that the paramilitary group has over 150 000 missiles, substantially more than its arsenal during the disastrous 2006 Lebanon War. Such a large arsenal threatens to overwhelm Israel’s Iron Dome air-defense system. By contrast, Netanyahu has historically opposed capitulating to Israel’s enemies. In 2005, when then PM Ariel Sharon withdrew from Gaza and expelled its Jewish residents, Netanyahu, who was his Finance Minister at the time, resigned in protest. As many right-wing Israelis feared, the withdrawal from Gaza resulted in the territory being taken over by Hamas, another Iranian proxy, which has since launched thousands of rockets towards Israel, and has burned thousands of dunams of valuable agricultural land by sending incendiary balloons across the border. Many Israelis prefer Netanyahu’s hardline approach, fearing that the Left’s willingness to compromise is too risky and reckless.

Netanyahu’s popularity has received a boost from the groundbreaking, wildly successful Abraham Accords which were declared under his leadership. Signed in September, 2020, the accords brought full normalization of relations with Sunni Arab states which previously did not even recognize Israel’s right to exist. Thus far, the United Arab Emirates, Bahrain and Morocco have established full relations with Israel – without requiring any transfer of territory or other assets, as did the 1979 peace treaty with Egypt, and the 1994 treaty with Jordan.  By all accounts, the Abraham Accords have brought great benefit to the Jewish State without any dangerous or costly compromises.

Rachel Avraham from Jerusalem told Community Magazine, “It is good that we have Netanyahu simply because we have a very precarious situation and Bibi is the only leader who can keep us safe from threats like Iran, Hezbollah, Hamas, Islamic Jihad, etc. He pushed forward the Abraham Accords and built good relationships with many Arab and Muslim countries. He is very much a democratic leader. Despite what the opposition says, he has a diverse cabinet and those who call him a ‘racist,’ ‘fascist,’ etc. have absolutely no idea what they’re talking about.”

The current state of the Israeli Left also contributed to Netanyahu’s electoral success.  The far-left Meretz party fell beneath the minimum threshold of four seats, thus losing its representation in the Knesset.  The Labor Party, which dominated Israel’s political landscape for decades, has sharply declined, winning only four seats – which is now the sum total of the Left’s representation in the Israeli parliament. (Yair Lapid’s Yesh Atid party describes itself as centrist.)  Netanyahu also capitalized on the inability of the Arab parties to merge, resulting in the Balad party falling short of the minimum threshold and thus being excluded from the Knesset.

The election results show the trend among Israelis to move away from the Left’s vision of a Palestinian State in the West Bank, living peacefully alongside Israel. The right wing is increasingly seen as more pragmatic and realistic in its handling of the ongoing conflict with the Palestinians.

Jeremy Corcos from Bnei Barak says, “This is the first time in history where we Jews have a place to go to that has a strong army that can defend us – this is nothing short of utopic for our people. And we have nowhere else to go in case the situation gets really out of control. This is why we need a good leader. As for the way the Left wants to prosecute him – his voters think it’s just a political ‘witch hunt.’ I personally don’t care at all if he gets cigars, or other gifts and perks as long as he does the job well. And so far, he has delivered!”

Netanyahu’s career as Prime Minister is peppered with numerous iconic moments. In 2014, he brazenly and fiercely opposed then President Barack Obama’s nuclear deal with Iran in a memorable speech to Congress in 2014, debunking conventional wisdom that an Israeli leader cannot survive without bending the knee to a U.S. President. From 2016-2020, he enjoyed President Donald Trump’s nearly unconditional, enthusiastic support, as well as that of other right-wing world leaders such as Brazil’s Jair Bolsonaro and India’s Narendra Modi.

With rising anti-Semitism in the West, and unrest plaguing Ethiopia and Ukraine, Israel saw a 128 percent increase in aliyah this year.  But immigration increased also from France and the United States, attesting to the fact that Israel is seen as an attractive option even for Jews in prosperous Western countries.  The Israeli economy, which Netanyahu has led for much of the last two decades – first as Finance Minister, and then as Prime Minister – has grown in leaps and bounds, drawing the interest and attention of Jews – and investors – the world over.

As President Isaac Herzog grants the 73-year-old Netanyahu the mandate to form the next government, we can only hope that he continues to steer the nation forward into the post-Abraham Accords era, cementing Israel’s place as a world leader in security and technology, and that the people of Israel will enjoy the peace and stability that they desperately want.