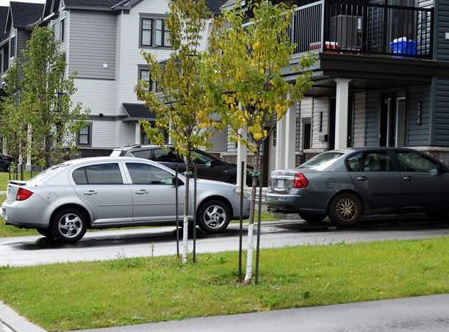 Jennifer parked her car in the private two car driveway of her home. She had parked her car in a casual manner, leaving little room in her driveway for another car to park. Mike needed to deliver and assemble a large package to Jennifer’s next-door neighbor and was circling the block for fifteen minutes in search of a parking spot. Frustrated, Mike decided to squeeze his car into Jennifer’s two car driveway alongside Jennifer’s car. Shortly thereafter, Jennifer (who was not an experienced driver) pulled out of her driveway denting Mike’s car. Jennifer’s car was also damaged by the accident. Mike made a timely arrival to the scene of the accident and took multiple pictures of the two cars. Mike presented the pictures to our Bet Din and claimed that if Jennifer had been more careful the accident could have been avoided. He claimed that with just enough room between the cars for Jennifer to pull out, she is responsible for the damage inflicted to his car. Jennifer countered that Mike was illegally parked in her driveway, and as a result not only is she not responsible for the dent in his car, but she is also suing him for the damage to her car.

Is Jennifer responsible for her actions? Is Mike liable for parking illegally? How should the Bet Din rule and why?

According to the ruling of the Shulhan Aruch a person is liable for damages he inflicts on another’s property. Liability is imposed on an offender regardless of whether his actions were accidental or unintentional. Interestingly, very often liability is imposed on one that inflicts damage even if the event was due to circumstances beyond his control.

The above ruling is not applicable to instances in which one illegally enters another’s property and subsequently suffers damages inflicted by the homeowner. Since the victim illegally entered the domain, the homeowner has limited liability for his actions.

Other halachic authorities differ and rule that even if a homeowner was aware of the illegal entry, nevertheless, he is not liable for unintentional damage. Since the victim illegally entered the property, the homeowner is only liable if he deliberately inflicted unnecessary damage to the trespasser. This latter opinion is recorded by the Shulhan Aruch and is clearly applicable to litigants of Sephardic origin.

While by rule of the Shulhan Aruch a homeowner is not liable for damages he accidentally inflicted to a trespasser, he nevertheless cannot collect on the damages he sustained on account of the accident. Although the trespasser illegally entered the property, he by no means actively damaged the homeowner.

Thus, in short, the homeowner who played the active role in the accident is absolved from the unintentional damage he caused but may not collect for the damage he sustained.

It is important to note the above ruling is applicable to a victim that illegally enters private property. In instances in which a victim illegally enters or parks in a public area, a competent halachic authority must be consulted, as the law varies. Hence, in the event an accident transpired with a double-parked car or via an illegal turn or the like, a competent halachic authority must be consulted.

VERDICT: Two Is a Crowd

Our Bet Din ruled in favor of Jennifer and absolved her of the damage she unintentionally inflicted to Mike’s car. Nevertheless, our Bet Din rejected her claim for the damage her car sustained on account of the accident.

As mentioned in Torah law, by rule of the Shulhan Aruch even though Jennifer saw Mike’s car in her driveway and was aware of the inconvenience to exit, she is not liable for damages since her actions were not malicious or deliberate. Mike illegally entered her property and thus he must bear the cost of damage to his car. Although other halachic authorities differ and impose liability on Jennifer, since she clearly saw Mike’s car in her driveway. Nevertheless, she is absolved from payment as per the ruling of the Shulhan Aruch.

The underlying reasoning for rejecting her claim for her car’s damage, is that Mike did not take an active role in damaging her car. Although he trespassed onto her property, he did not inflict damage to the car and is not liable for the damage she sustained.

It is important to note, that the above ruling is applicable to a victim that illegally enters private property. In the event an accident happened with a car illegally parked in a public domain, the law varies considerably.

As this article is prepared for publication, Israel is under fire with a barrage of missiles launched from the Gaza Strip. The following case took place just minutes after the first rockets were shot towards Central Israel. It portrays not only the obvious danger of the missiles, but also the interruption of daily life and the financial challenges involved. Due to the nature of the incident the case did not appear before our Bet Din, as the parties preferred to settle the matter via telephone at the scene of the dispute.

Abie and Joey hired a driver, to be paid per hour, to tour around Israel. Touring from Northern Israel towards the south they stopped at many of the regular tourist attractions. Upon their arrival in Tel Aviv, they were shocked when blaring sirens went off and their driver immediately forced them to evacuate the car and head for the closest bomb shelter in a nearby building. They spent nearly six hours in the shelter before they were able to resume their travels. The lengthy delay was due to a missile that landed only a few yards from their shelter. Upon arrival at their destination the driver requested payment for the six hours they were delayed in the bomb shelter. Abie and Joey were appalled that the driver had the audacity to request payment for an emergency stop that was beyond their control. The driver insisted that he was hired per hour and is entitled to his pay.

Is the driver entitled to payment for the time spent in the bomb shelter? How should the Bet Din rule and why?