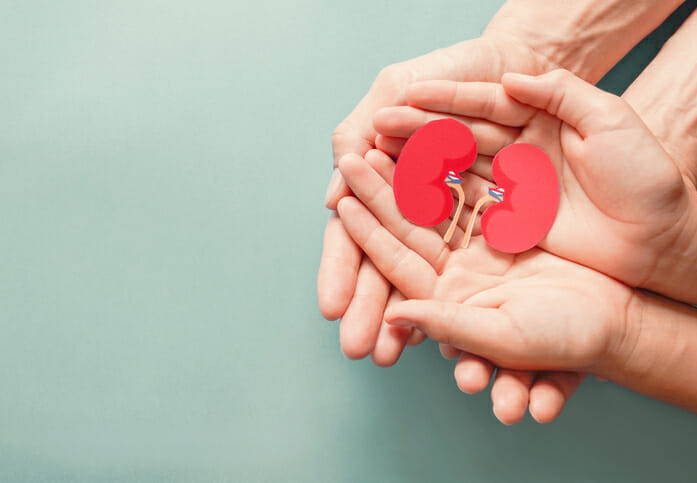 In the Midrash (Beresheet Rabbah 68:4), we are privy to a conversation between Rabbi Yossi ben Halafta, one of the sages of the Mishnah, and an unnamed Roman woman of rank. During this exchange, Rabbi Yossi attested that ever since Gd created the world, He has been occupied with shidduchim, making matches. The Mishnah’s reference, and the most common understanding of a “shidduch,” conjures up images of brides and grooms, weddings, and the long-awaited happiness of finding a zivug, or “match.”

While single men and women await their life partner with excitement, trepidation, and at times impatience, there are others waiting for a life-saving “match” in the form of a kidney donor.

“Find Someone Who Can Use My Kidney”

Emily Volz has always been aware of the lifesaving gifts that we have inside our bodies that we need to share. From a very young age, she was a conscientious blood donor and signed onto the bone marrow registry. Registering to become a live organ donor, she says, “just felt like the obvious right thing to do. I have always been aware that tissue and organs are needed for people to survive.” Emily believes that her awareness and sensitivity to this need can be attributed to her having lost her father when she was just seven years old.

So last July, in the midst of the Covid spikes and plateaus, Emily underwent the process to gain approval to become a kidney donor. Once she was approved, she was matched with a few transplant hopefuls, but timing and various health issues prevented a transplant from taking place. Then, in December 2020, a definitive match was made. After further testing to ensure the health and safety of both the donor and recipient, a transplant was scheduled.  But unfortunately, at the last moment the designated recipient was not well enough to undergo a transplant.

Emily recalls feeling “a bit frustrated, especially since I was going back to Israel at the start of the next school year. But I knew that whoever was supposed to have my kidney would have it. I trusted that it was going to work out well, and I told the doctors, ‘Find someone who can use my kidney before I leave’.”

The Gift of a Better Life

For three years, Elizabeth Yedid Hinden was dealing with the daunting challenges of kidney failure and dependence on dialysis to flush toxins out of her body so she could stay alive. As she describes it: “On Mondays, Wednesdays and Fridays, I would get up at 3am, and be picked up at 5:45am to go into the city where I spent four-and-a-half hours tethered to a machine. I would get home exhausted and fall into bed. On the days I wasn’t having dialysis, I was recovering from the procedure. Dialysis stole all my time and energy, and I became a slave to dialysis.” Her only hope for a fuller, richer life was a kidney transplant.

According to the U.S. Department of Health and Human Services, there are over 90,000 people waiting for a kidney transplant, with another person being added to the list every nine minutes.  The grim news is that 17 people die each day waiting for that lifesaving organ. AJ Gindi, community advocate at Renewal – an organization that matches organ donors with patients – and a kidney donor himself, adds: “There are 14-16 cases of people in our community who are in need of a kidney, and the best odds of them finding a match is from someone within our community.”

Liz understood that the odds of her getting a kidney, with an average wait of 7-9 years,  were slim, unless she got up and proactively searched for a donor.

“I was tenacious,” she said. “I contacted every hospital, every organization. And even after being rejected by several hospitals, I kept on trying. And I prayed – a lot.”

Liz’s family, with the help of Renewal, organized a kidney awareness event for the family, friends and the community. Eighty people attended, and many agreed to be “swabbed” to be tested for possible matching to Liz.

Although Liz was and is so grateful for everyone’s efforts, no match was found at that event, and she continued to wait. Then, on July 27, 2021, at 2:30pm, Liz got the life-changing phone call from NY Presbyterian Weill-Cornell telling her that a potential match had been found for her, and that she needed to be in the city the following day for further testing.

Emily received a similar phone call from her hospital telling her that there was another potential match for her kidney, and off she went for further testing. The next obstacle she faced was a series of negotiations between the two hospitals. Usually, when a transplant occurs, both the recipient and the donor are at the same hospital. In this case, since only one hospital would collect a fee, intervention and negotiations from Renewal were needed to make it happen.

On August 25, 2021, a full year after Emily registered to become a donor, and three years after Liz began dialysis, the long-awaited transplant took place.

Because they were not in the same hospital, the two women met over FaceTime right before the surgery. “I remember asking Emily, ‘Why are you doing this?  It is so good of you!’ Emily’s response was: ‘It’s the right thing to do’.”

After a week in the hospital, Liz returned home to recover.

“The transplant has completely changed my life. I went from having all my time dedicated to my health and finding a donor, to enjoying and pursuing the things I love. I have been wearing a bracelet that says ‘blessed’ and that is how I truly feel – blessed and grateful.”

That is another thing she and Emily share. “I feel truly blessed and honored – blessed to be healthy, and honored that I have been able to give someone the gift of a better life.”

Rock-Climbing After Donating a Kidney

The idea of donating a kidney to a total stranger is something which few of us have entertained. A cup of sugar, no problem. My car – maybe, if you have your own insurance and fill it with gas when you’re done. But body parts…umm, not so fast.

One reason for the widespread hesitancy is the lack of knowledge about the nature of kidney donation. AJ Gindi, as a representative of Renewal, spends much of his time educating the public. “The donor process begins with a swab test. The swab will give us quite a bit of information about the potential donor. It will tell us his blood type, his HLA type, and other details which will give us an idea of whether or not he is a match for a recipient.” Extensive medical tests follow to assess if you are healthy enough to donate a kidney. “Because the health and wellbeing of the donor is paramount, they will undergo extensive medical testing to ensure that they will be in perfect health after the donation. Most donors will be in the hospital for 2-3 days, and within three weeks are back to full physical strength.” Emily shared that she went rock climbing just one month after she donated her kidney.

Transplants take place around the schedule of the donor, and the donor is fully reimbursed for expenses incurred, including lost wages. At all times, the donor “owns” his or her kidney and can choose to donate anonymously or become a “directed donor” through an event for a specific recipient. The fact that only 30 percent of the people that sign up to be donors actually qualify to donate underscores the tremendous need for volunteers.

Rabbi Yitzhak Dwek, a recent recipient of a kidney transplant, sees kidney donation as a holy endeavor. “Hashem, our creator, is the ultimate giver,” the rabbi says. “A person who gives of himself so selflessly, giving another person the chance for a better life… is tremendously holy.”

When I spoke to the rabbi, I shared my thought that Hashem is hard at work not only making marriages, but matches for kidney transplants, as well. He wholeheartedly agreed, and told me his story as further corroboration that these shidduchim happen with Gd’s clearly discernible assistance.

As a single woman, the donor babysat for Rabbi Shimon and Rebbetzin Russel’s children. Before her wedding, she asked Rabbi Russel to meet her fiancé and give his approval. The rabbi confirmed that he was a fine young man, and they married. Fast forward many years…Rebbetzin Russel is in need of a kidney transplant, and the donor approaches Renewal to be tested as a possible match. Although she was not a match, her husband was so inspired by her willingness to donate her kidney, that he also did the swab test and was a match!!  The rebbetzin received her life-saving kidney from him.

Fast forward another several years…and Rabbi Dwek is now in need of a kidney after a debilitating bout of Covid. A community event, with over 500 people attending, was held to find a donor for the rabbi, but no match was found. However, Renewal has a database of past volunteers, and found that the donor who was not a match for Rebbetzin Russel was, in fact, a match for Rabbi Dwek. So her kidney, which she intended for Rebbetzin Russel, who subsequently received her husband’s kidney, went to Rabbi Dwek!

But wait…there’s more! When the rabbi and the donor met, they discovered that she was a childhood friend of his daughter’s, and had been in their home many times!

I don’t know how you express your profound amazement at the events I just described, but I know I have broken the rules of writing by overusing exclamation points… It is the only way I know, as a writer, to convey my excitement at witnessing Hashem’s benevolence at work.  There is no denying that the Supreme Matchmaker, Hashem, who actually performed the first transplant when he removed Adam’s rib and created Havah, is present and arranging the needs of His beloved people. 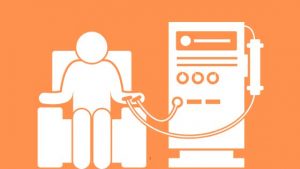 Rabbi Dwek expresses his enormous hakarat hatov (gratitude) for the extraordinary communal support system that was at work throughout this process, to all those who have been praying for him daily, and to each of the 500 people who came to be tested as potential donors on his behalf.

“I always knew that our community is great. Throughout the whole ordeal, I never felt alone. I had Hashem and the community behind me. Our hesed and charity is amazing. But donating a life-saving organ is on a whole other level.”

Liz also expresses her heartfelt gratitude, not only to Hashem and Emily, but to the hospital staff and nephrologist Dr. John Lee, who monitor her recovery on a monthly basis. “I am grateful to have so much time on my hands, to pursue the things I love, like teaching art to the seniors at DSN and SBH. I am happy and excited to be able to give back, especially to the seniors. They need something to do, too.”

These miraculous, happy endings are but two of the many stories of selfless giving and grateful receiving. Emily Volz speaks from the heart when she says, “I believe anyone with the gift of health can think of someone else on the other end who is relying on the kindness of a stranger to save their life. And although it may seem scary, we are sharing a tremendous gift.”

Although it is clear that Hashem’s divine intervention is at work in these “matches,” the process begins with us. For more information about becoming a donor, or if you know of someone suffering from kidney failure, please contact our Renewal community Advocate, AJ Gindi, at 732-996-4040. That phone call could very well end up saving a life.