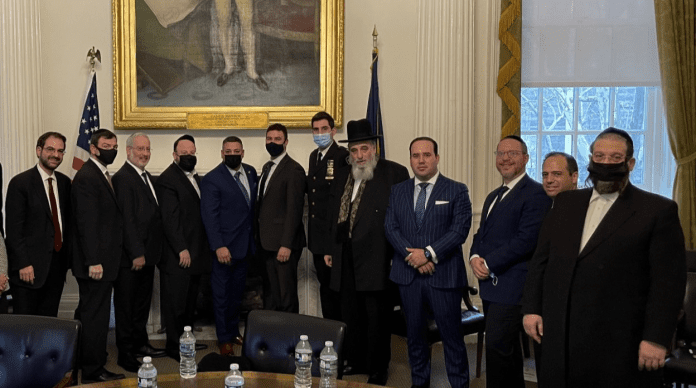 In response to growing concern over anti-Semitic hate crimes, Mayor Eric Adams hosted a high-level strategic meeting with Jewish leaders last month at City Hall. Mayor Adams spoke strongly about fighting hate crimes and making education and enforcement a top priority. The Mayor stated that he asked Education Chancellor Banks to attend “as a call to action” in order to collaborate with the leaders there and add school curriculum which educates students about respect and sensitivity to the many diverse communities of NYC. Mayor Adams personally pledged about himself that “no one is going to work harder, no one is going to be more committed, no one is going to be more dedicated in these next few years to turn this city around in the right direction.”

Police Commissioner Keechant Sewell stated “We take these crimes seriously. We value the partnership we have in the community and we hope to enhance that going forward.”

NYPD Inspector Richie Taylor spoke about the hate crime assault which occurred the week before on Friday night at Avenue L and East 32 Street at 10:40pm and the hate crime menacing incident which occurred a few minutes later on Nostrand Avenue and Kings Highway. Inspector Taylor spoke about how the mayor was personally involved in directing the investigative response to these incidents and with intelligent detective work the perpetrator was arrested.

“Mayor Adams’ immediate response speaks volumes,” said Inspector Taylor, who said as soon as the hate crimes took place, Mayor Adams immediately “got the ball rolling to start the investigation, and that is something I have never seen a mayor do before.”