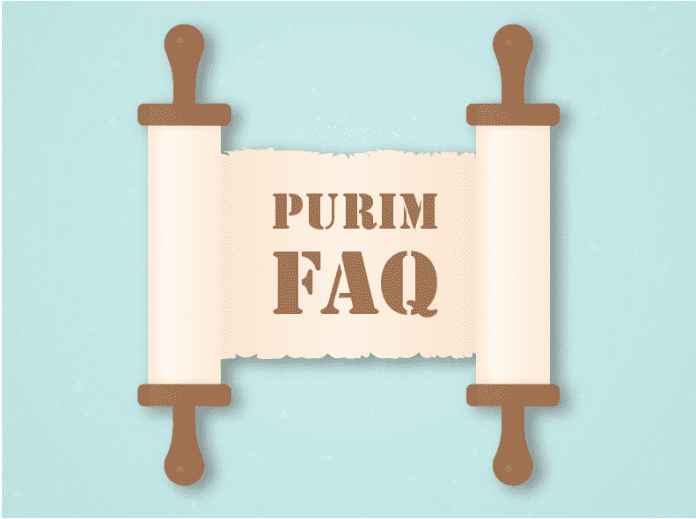 Can I eat before hearing the Megillah?

One should not eat until he or she hears the Megillah. This applies for both for the nighttime recital and the morning reading. If one is weak and the fast has ended, then he should ask a Rabbi what to do in his specific case.

Do I need my own Megillah?

Although having a kosher Megillah is commendable, it is not necessary to fulfill the mitzvah as you will be hearing the words being said by the hazan.

Due to the sanctity of the scroll, one touching the parchment of a Megillah without a kerchief is required to wash his hands before doing so. If one has already washed his hands before prayers, his hands are considered ritually clean and he need not wash again.

I was late to the Megillah reading. May I listen from where they are up to and hear what I missed afterward?

The Megillah has to be read in order. However, if one is only a minute or so late, he may catch up by reading from a humash or other text with the Megillah, provided that he starts from the beginning, and catches up to the hazan, and provided also, that more than half of the Megillah is heard from the hazan, or that he is reading from a kosher Megillah. The berachot should be recited before he starts to read.

What if I tuned out for a few seconds?

One must hear every word of the Megillah. If you know what the reader just read, then you have fulfilled your obligation even if your mind wandered a bit. However, if you missed a few words, you can make them up by quickly reading them yourself from any text.

I am unable to make it to synagogue – may I listen via zoom?

I am reading for my family and there is no minyan. May I make the blessings?

If one possesses a kosher Megillah and is reading for his immediate family, if there isn’t a minyan, he may make the blessings before reading. However, he may not make the blessing after the recital of the Megillah.

Mishloach Manot, which is the sending of gifts, is one of the more exciting mitzvot of the day instituted to increase camaraderie. Haman’s decree, to wipe out the Jews, was sold to Achashverosh on the basis that the Jews were not united. Therefore, to show our harmony, we renew and enhance friendships by sending each other gifts of love on the day of Purim.

Men and women; boys and girls over bar and bat mitzvah are all obligated to give Mishloach Manot. Younger children should also give as hinuch, training in mitzvot. A husband and wife should each perform the mitzvah as individuals. A man giving to a man, and a woman to a woman. One should preferably give Mishloach Manot through an agent. However, if one feels that giving the Mishloach Manot directly will increase the bond of friendship then he should do so.

When should I give?

The obligation to give Mishloach Manot can only be fulfilled during the daytime. If you ordered a package before Purim to be delivered to a friend (for example by Amazon), the obligation will be fulfilled only if it arrives on Purim day.

What should I give?

Preferably one should give something respectable that befits the stature and honor of both the person giving the gift and the recipient. One should give at least one of their Mishloach Manot in a way that meets this requirement.

To fulfill one’s obligation, one must give two different foods. Preferably one should give food that is ready to eat. Drinks are also counted as an item; however, a plain water bottle or seltzer is not. Teabags or even fresh ground coffee are not ready-to-eat foods. However, the giving of a hot or iced coffee, tea, or another flavored beverage does fulfill the mitzvah of Mishloach Manot.

How many should I give?

One fulfills his obligation by giving Mishloach Manot to one person. However, the more one gives the better, as you are creating or strengthening more friendships. If one has a choice between giving funds to additional needy individuals or giving a larger number of Mishloach Manot, it is better to give tzedakah to more destitute individuals. There is no greater happiness than making the hearts of poor people, widows, and orphans happy!

Matanot La’evyonim – Gifts to the Destitute

How much do I give?

The mitzvah is to give tzedakah to at least two poor people. Some say one may give each poor person a perutah, a small amount. Others say one should give enough to buy a meal, which is approximately ten – twenty dollars.

In practice, one should give the preferred amount to at least two poor people. To any additional needy person, one may give as he wishes, the more people the better.

Both men and women alike must give Matanot La’evyonim. Even a beggar who receives charity must also give. A husband may give on behalf of his wife, however each one gives to two poor people.

To whom should I give the money?

One fulfills the obligation of Matanot La’evyonim by giving funds to those in need who struggle to pay for their basic needs. This can be done by giving the appropriate amount to trusted people or to organizations collecting on behalf of the poor who will distribute them specifically on Purim day before sundown.

Can I send the money before Purim?

You may send the money ahead of time, provided that the money is received by the poor person on the actual day of Purim.