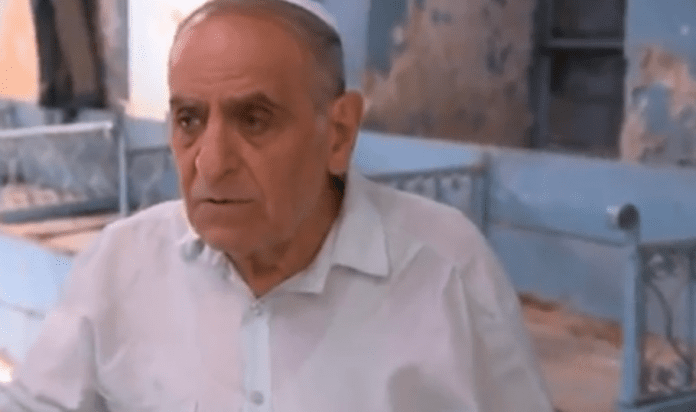 Albert Kamoo served as president of the Syrian Jewish community in Damascus for 16 years, until his death this past September. He leaves behind only nine other Jews in all of Syria, a reliable source told Community Magazine.

Mr. Kamoo was 80 years old. He diligently watched over the Jewish cemetery and the now-empty synagogues, which were once vibrant and filled with regular congregants. He also maintained constant communication with international organizations that aided the dwindling ancient community.

In 2011, when the Syrian civil war began, the Jewish community was estimated to be 200 members strong. The nine remaining community members are mostly over sixty. A 2019 BBC news segment in Arabic was filmed in Damascus at the historic Eliyahu Hanavi Synagogue, which had been bombed and looted during the civil war. The film featured Kamoo, wearing a kippa, along with  his sister, Rachel. She is believed to be his only surviving relative. A few Jewish artifacts of historic value were shown in the film clip. The synagogue was built in in the Sephardic tradition, with classic Ottoman architecture and Islamic influences.

The Great Aleppo Synagogue (better known as Al Safra, “the yellow”) was in actuality a complex, with several synagogues and an outdoor sanctuary for use in the hot summer months. It is said to have been founded by Joab, a nephew of King David.  The oldest surviving inscription is from the year 834.

Many Syrian Jews emigrated to the Americas during the early 1900s. The last official national census that listed religious affiliation was conducted in 1953. Over 31,000 Jews were recorded living in Syria, a figure equaling slightly less than one percent of the population. The two major Jewish population centers were in the capital city of Damascus and in the northern city of Aleppo. Then, in the aftermath of the Six-Day War in 1967, conditions for Jews severely deteriorated and a mass emigration followed. The last chief rabbi of Damascus, Abraham Hamra, left Syria in 1994, when President Hafez Assad allowed the Jews to leave. The last Chief Rabbi of the Aleppo community, Hacham Yom Tov Yedid, emigrated in 1985.

In 2015, many Jews fled to Israel via neighboring Turkey as part of a top-secret rescue mission following escalating violence in the civil war and the threat of ISIS looming.

New York-based businessman Moti Kahana assisted 28 Jews, mostly from Aleppo, to escape. He  orchestrated the complicated logistics involved. He said, “It was extremely dangerous for them. I’m not supportive of the Syrian government, but they did not harm the Jews. In fact, they protected them. The risk was more from fanatic extremists and potential kidnappers than from the Syrian government.” He continued, “I know many Jews who would love to go back to Syria if they had a chance. But with the economy down the drain and very poor safety, why would they live there? Deep down, we are Middle Easterners. We love the food, the weather, and other things in the region. But it’s just not safe.”

In addition to the Jews, Kahana helped over 5,000 Muslims to flee the war-torn nation. He chuckled, “Only the Queen has blue blood probably, for everyone else it is red.”

Yemen and Iraq, which also have had ancient, established Jewish communities now count less than half a dozen Jews. Almost all of those countries’ Jews have emigrated due to severe persecution, a lack of safety, and economic instability. The Jewish community in Turkey would periodically send a shochet to perform shehita, but that ultimately ceased. Other Jewish communities such as those in Ireland and India have also been reduced to a shadow of what they once were, barely a century ago.